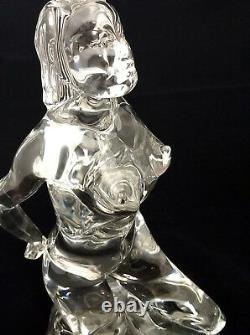 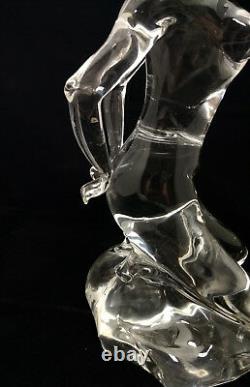 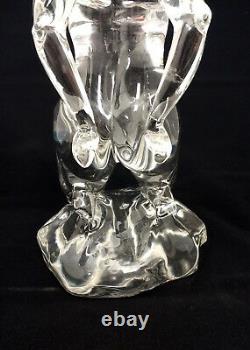 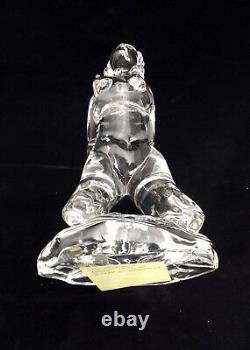 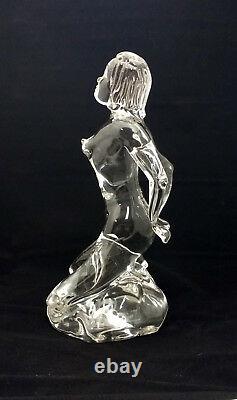 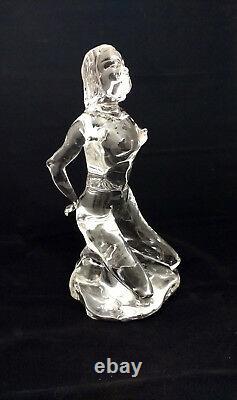 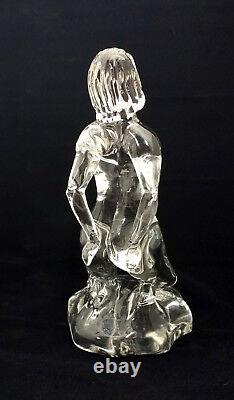 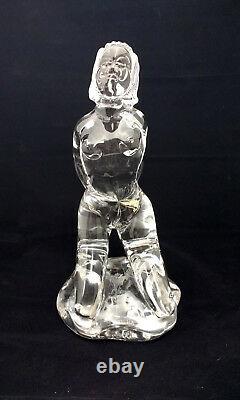 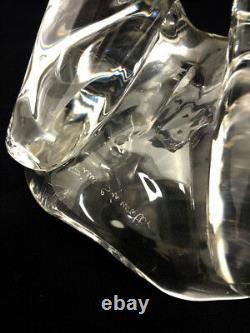 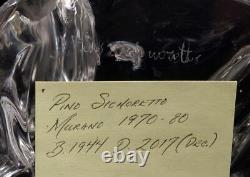 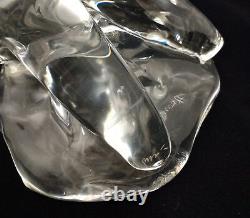 Vintage original Glass Sculpture of a female nude by the master, Pino Signoretto. A lovely piece created late 1970's to early 1980's depicting a woman on her knees, head tilted back, hands behind her back on her hips...

Beautifully done and I have never seen another that he created in this pose. Measures approx 13.5 inches high, 7 inches across, a bit over 11 pounds. Signed Pino Signoretto under the base (pictured), easy to see from the top too (pictured). There is one internal mark in the glass on the thigh (pictured) which does not translate to the surface. Wear commensurate with age, slight scratching under the base.

Beautiful vintage piece from one of the most highly regarded glass artists of the century! Pino Signoretto is recognized as one of the preeminent glass sculptors in the world today. He trained with celebrated Venetian. Alfredo Barbini and became a master himself in 1960, manipulating glass with uncommonly high skill. Signoretto has worked with international artists and architects, and in many materials, but he remains committed to glass, which he calls the unrivaled Master of my life... Documentary filmmaker Robin Lehman, winner of Academy and Emmy Awards, catches the drama and intensity involved in the creation of works in glass by the maestro Pino Signoretto. One of the most famous and widely hailed glass masters in the world, Pino Signoretto, known for his incredible facility in sculpting from hot glass, died at the age of 74 on December 30th, 2017. Equally comfortable fabricating for international artists such as Salvatore Dali, Kiki Smith, and Jeff Koons, he never abandoned the traditional clowns and other classic Murano figures, which he rendered at larger scale and with greater fluidity than anybody else.

He made work with Dale Chihuly, and was a regular guest at the Pilchuck Glass School, where he freely shared his unique skills. He also mad regular trips to Japan. On his Facebook page, Dale Chihuly writes: Pino was one of my best friends and one of the greatest glass sculptors of our time. He made extraordinary pieces and his skill and deep generosity of spirit helped not only me, but hundreds of other artists realize their creative vision.

We will always remember you and love you. Signoretto was asked if there was a connection between glassblowing and the sea, and he gave a lengthy and eloquent answer. Furthermore, glass itself has something to do with the sea, in effect, to make the magic happen you need four ingredients: sand, water, air and fire, to which I would add a fifth element which is the physical energy which the artist needs to use to shape glass. It is a wonder that mankind performs since the beginnings of civilisation; almost a shaman's rite which makes the master glassmaker akin to the vestal virgin in the sense that he always fears leaving his furnace wishing to keep the fire ever-burning. This item is in the category "Pottery & Glass\Decorative Pottery & Glassware\Figurines".

The seller is "jonihamari" and is located in this country: US. This item can be shipped to United States.