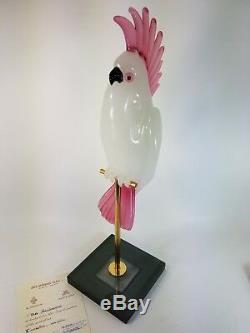 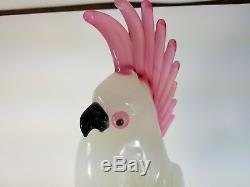 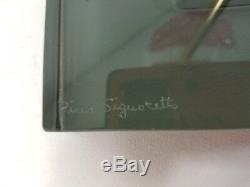 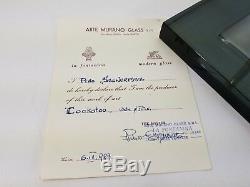 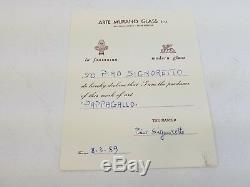 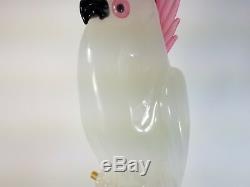 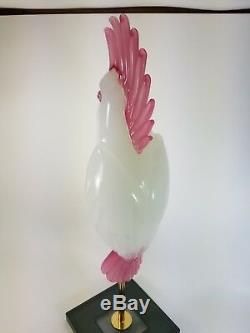 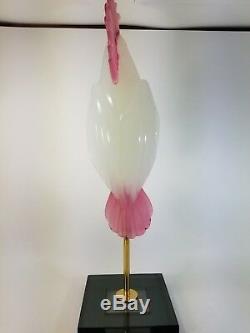 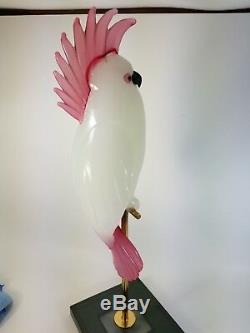 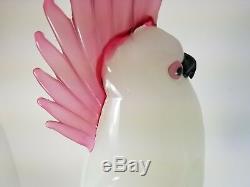 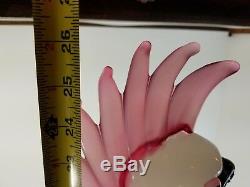 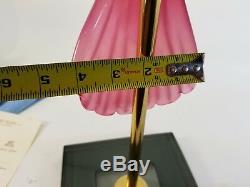 This beautiful piece was sculpted (blown) personally by Pino Signoretto in Murano Italy. His signature can be seen on the base. It comes with the certificate of authenticity dated April 6, 1989 which is also signed by Signoretto.

I 100% guarantee it's authenticity. The Cockatoo or Parrot stands about 26 tall and is a substantial piece weighing 19 lbs. Easily can be the centerpiece of any collection. Pino Signoretto passed away in 2017 and his original pieces will only get harder to find.

One of the most famous and widely hailed glass masters in the world, Pino Signoretto, known for his incredible facility in sculpting from hot glass, died at the age of 74 on December 30th, 2017. Equally comfortable fabricating for international artists such as Salvatore Dali, Kiki Smith, and Jeff Koons, he never abandoned the traditional clowns and other classic Murano figures, which he rendered at larger scale and with greater fluidity than anybody else. A funeral service was held at the church of Santa Maria e San Donato, one of the oldest churches in Venice, on January 3rd, 2018, to honor the man Alfredo Barbini once called the rare type of maestro who comes along once in a century. Born in the municipality of Favaro Veneto, just outside Venice in 1944, Signoretto began working for a glass house making chandeliers at the age of 10.

As he became a teenager, he began to receive notice as an apprentice and then worker for such legendary glass masters such as Alfredo Barbini and Livio Seguso. The precocious Signoretto earned the title of maestro at the age of 16, and became renown for his range of knowledge and developed skill in working with glass, as well as an unrivaled technical expertise in the material. In 1978 he opened his own studio in Murano, and became famous for collaborating with artists around the world. He made work with Dale Chihuly, and was a regular guest at the Pilchuck Glass School, where he freely shared his unique skills. He also mad regular trips to Japan.

On his Facebook page, Dale Chihuly writes: Pino was one of my best friends and one of the greatest glass sculptors of our time. He made extraordinary pieces and his skill and deep generosity of spirit helped not only me, but hundreds of other artists realize their creative vision. We will always remember you and love you.

In a 2007 interview with a yachting magazine, Signoretto was asked if there was a connection between glassblowing and the sea, and he gave a lengthy and eloquent answer. Furthermore, glass itself has something to do with the sea, in effect, to make the magic happen you need four ingredients: sand, water, air and fire, to which I would add a fifth element which is the physical energy which the artist needs to use to shape glass. It is a wonder that mankind performs since the beginnings of civilisation; almost a shaman's rite which makes the master glassmaker akin to the vestal virgin in the sense that he always fears leaving his furnace wishing to keep the fire ever-burning. This is a picture of the sculpture while still in Boosales' house. I took the picture to document the history of the item.

The seller is "revjoanna" and is located in Saint Petersburg, Florida. This item can be shipped to United States.